Harkon Protector is Trickster Online's PvE Tower Defence gameplay mode created for group content. At a specific time and location, Tricksters must enter the Shadow World by activating the skill "Mind's Eye" and talk to Eclipse, who will teleport them to the Shadow Sanctuary. Tricksters must defend the Harkon Statues from an ever increasing wave of Shadow Monsters and Shadow Bosses. If they make it to the end they will be confronted with the final Shadow Boss. The key to success is a sound strategy, group coordination, planning and AoE skills. Staff-run Harkon Raids are run often and prizes are given out to participants, pay attention #harkon-events on discord to

Players must have the skill "Mind's Eye" to talk to Eclipse and enter the Shadow Sanctuary. At staff-sponsored raids, staff members will have skill cards for Mind's Eye and give them out to players who need it.

The Shadow Monsters drops Shadow equipment, which is sellable to NPCs for 60k each. Hecate of Magic, Charybdis of Sense, Gorgon of Power, and Scylla of Charm all give their own shards which can be exchanged with Shadow NPC Stella in Megalopolis Shop for Altiverse Equipment.

Eclipse offers to teleport Tricksters to Shadow Sanctuaries 8 times a day. To see her you must activate your Mind's Eye skill and be in the correct location where and when she spawns. The time and region of where Harkon Statues are weakening are announced in-game in the Chat Box at 10 minutes and 2 minutes before the Shadow World opens. The first 30 Tricksters to talk to Eclipse for that region are accepted into that region's Shadow Sanctuary. 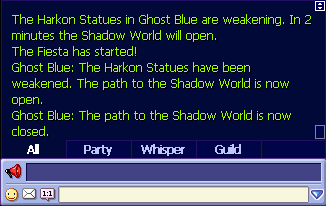 GMT WorldtimeBuddy: Input your timezone to convert the server/game's time to your local time. A clock with the server's time can also be found on PandaTO's website.

Eclipse will only appear when the path to the Shadow World opens. When this happen, she offers to teleport Trickster to that region's Shadow Sanctuary.

Upon entering the Shadow Sanctuary, on the upper right of the screen will be a mini-map that shows the locations of the Harkon Statues and the time remaining.

This consists of a wave of attacks of all Gloom monster mobs and one Shadow Boss appearing after the end of each Gloom monster wave.

Defend against hordes of Shadow Bosses.

Retrieved from "https://pandato.fandom.com/wiki/Harkon_Protector?oldid=5927"
Community content is available under CC-BY-SA unless otherwise noted.